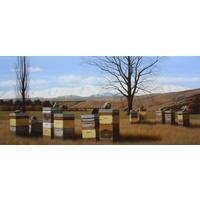 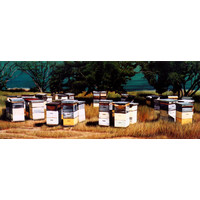 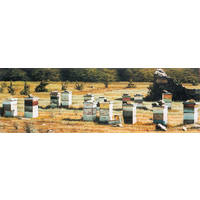 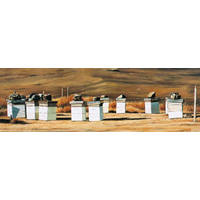 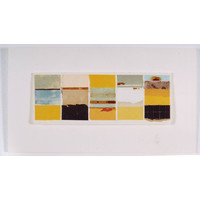 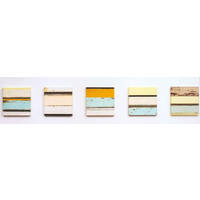 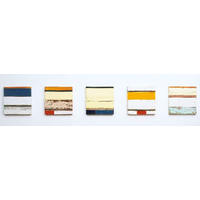 Duologue – New Paintings is an exhibition in two parts. The dialogue between representational and abstracted beehives provides the subject of this debate.

The representational works are all location specific and as evidenced in the titles are a journey around Central and North Otago and the McKenzie Country as it reaches up into South Canterbury.

In works such as Mount Pisa, Roxburgh, Lawrence, Michael Hight is standing further back than previously and examining the composition of the beehives in the larger context of a regionalist landscape. In these works he explores the contradiction and contrast of the man-made beehive in both the natural and farmed landscape. The signs of man – tapered posts, a tamed river, roads, trees planted as windbreak – imbue the works with a large vocabulary.

In Cromwell Gorge he establishes a metaphor of abandoned fruit trees guarding and shading a complex arrangement of hives that show all the signs of being a commercial enterprise. Yet there is not one bee to be seen. Impermanence is the under-current, not the languid river.

He “paints with great exactitude,” conferring on the beehives “a presence that is monumental.” However “representation is only one level of these splendid paintings” for there is his trademark concern with the particularity of place, familiar geometric patterns, the harmonics of colour. (1)

The ultimate artistic success of these beehive works is such that they irrevocably alter the way people look at the landscape.