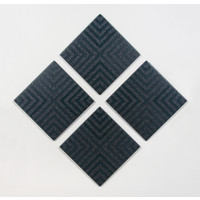 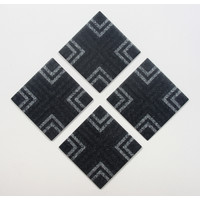 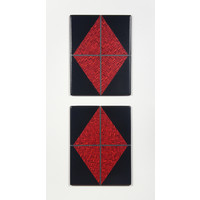 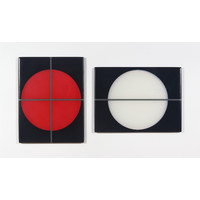 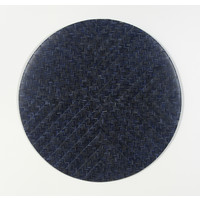 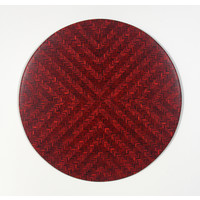 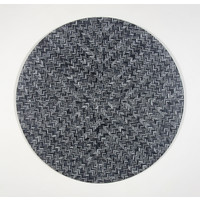 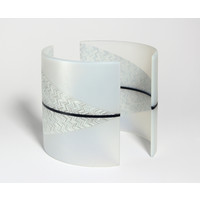 The intersections of mythologies, histories, and science are the underlying inspiration for Te Rongo Kirkwood’s Whānau Mārama. The glass artist uses universal symbols - chevron, circle, line, cross - to create abstract patterns which represent the weaving together of cultural narratives and mathematical explanations of the heavens. The optical effects produced by the works become a tangible manifestation of the resonances of memory and the “harmony of the spheres” Kirkwood is interested in exploring.

In many works, repeated chevrons draw the gaze repeatedly to a central vanishing point. In Dark Matter, Star Matter, multiple centres appear and disappear across the panels, not only linking each panel to the other, but bridging the ‘empty’ space between them. Alternating dark and light stripes strengthen this illusion of movement and the works pulse with energy. Comparisons can be drawn here between Kirkwood’s use of line and pattern and that of New Zealand painters who experimented with the optical effects of minimalist mark-making - Ralph Hotere’s black works and Ian Scott’s lattices from the 1970s come to mind.

As sculptural objects, the glass works mediate space in a number of ways. The three Morphic Resonance Series works are planar in form, but Kirkwood uses the optics of the clear glass inserts to establish depth within the plane. The ‘woven’ segments seem to advance out from the circle, unbounded by its two-dimensional surface. In a similar manner, Pyramid Song compresses space between its two curved planes but also allows this same space to flow freely around the forms. The translucence or opacity of the glass in this work also complicates the viewer’s relationship with the space that it occupies. The opaque, patterned surface clearly delineates the outer border of the object but as light diffuses through the glass it blurs the peripheries of the object in space.

Considering Kirkwood’s artworks only within the paradigm of Western modernism does not however, recognise the way in which the artist’s practice and works also sit within te ao Maaori. Fourth Dimension Harmonics immediately recalls the stories and history contained in weaving and tukutuku panels. Kirkwood’s sun and moon discs are reminders that for many cultures, these celestial bodies were worshipped as gods and believed to have governed not only night and day, but the fortunes of humankind. Through her art practice the artist seeks synchronicities between the information found in spiritual belief systems and that found in the rational structures of modern science.

By its nature fragile and difficult to work with, the fusion of many small pieces of glass into a rich and harmonious whole is delicate and labour-intensive work. Kirkwood’s finished glassworks are physical representations of the whakataukii “Ehara taku toa he toa takitahi, engari taku toa he toa takatini” (1). Te Rongo Kirkwood draws on both indigenous and Western cosmological paradigms and like her artworks, her practice is strengthened by the fusing of many variations of knowledge and skill.
1. “My strength is not the strength of one, it is the strength of many.” 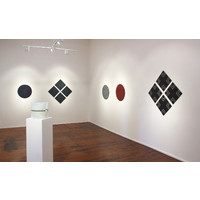 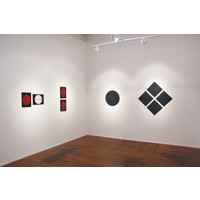 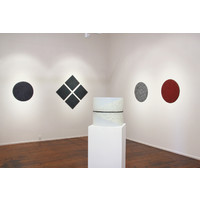 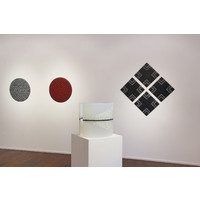