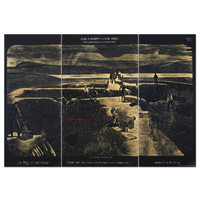 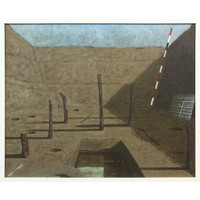 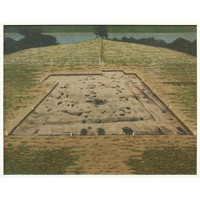 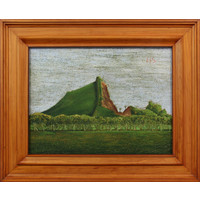 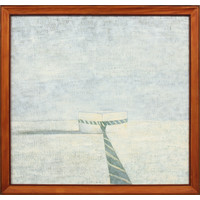 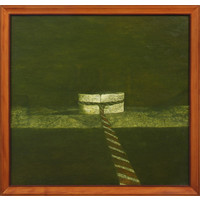 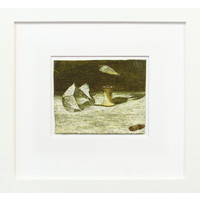 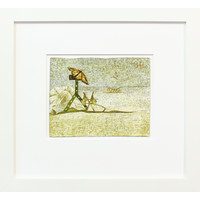 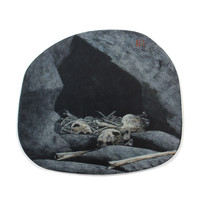 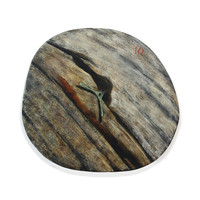 A Small Bronze Object is Found in the Coromandel (Study) (2010)

The Social Fabric illustrates the breadth and depth of Michael Shepherd’s art practice. Shepherd’s sustained intellectual theories about the social warp and weft of this country have, for over 40 years, been given form using an ever-developing array of exquisite painting techniques. A self-described “metaphysical still-life painter”, Shepherd’s concerns run deeper than the outward appearance and utility of the things he depicts. He wishes to explore the fundamental nature of each object (or landscape or people) he paints and, through this, the underlying web that connects them all.

Comparing Shepherd’s still-lifes from the late 1970s and from 2010, it is possible to see the similarity of their foundations as well as the extension and development of initial concepts. Drawing on the tradition of 17th century Dutch still-lifes, Shepherd paints a carefully curated selection of objects, intimating the narrative that connects them. Attention is paid to the fall of light and the composition of the arrangement, and there are subtle pointers to the histories that form the context for each work. Shepherd’s brushwork possesses a restless energy; this is especially evident in the earlier works and is tempered somewhat in the more contemplative works from 2010.

Shepherd does not hesitate to bring together the unexpected and in Military Memories (1980) the incongruity of the monarch butterfly perched above the crossed flags of a signalman’s regimental badge gives the viewer pause. This moment invites contemplation: why did New Zealand men go to war “for king and country”? What now remains of the many fleeting lives other than memory and the gilded insignia they left behind?

The same curiosity about the past’s flotsam can be seen in the much more recent A Small Bronze Object Found in the Coromandel (Study) (2010). Shepherd provides few clues to its story and leaves the decoding of this ‘relic’ to the viewer. The irregular physical shape of the panel contributes to the feeling that it has been worn away over time and complements the softly textured stone or driftwood that forms the resting-place for the found object.

Shepherd’s landscapes expand his social commentaries from the personal to the public sphere and reveal a land in the process of being measured, excavated and reconfigured. The hidden narratives of history, and the way in which they are interpreted, are examined in Via Apia (2006) and The House Beneath Te Rangi (2006). As in the still-lifes, the landscapes record the fragments of lives once lived and Shepherd suggests the ineffable nature of their stories that can never be ‘known’ but only surmised as the archaeological grids and scientific method can only ever ‘scratch the surface’. Ihumatao (1985) tells a more brutal tale and documents the quarrying of the sacred maunga of the oldest pa site in the country. The disfigured hill bleeds against a grey sky and Shepherd’s carefully situated power poles loom like crosses in the wounded land.

The dominant piece in The Social Fabric is the 1990 triptych The Advance on Rangiriri. It references the 1863 battle for Rangiriri Pa, led by Captain Henry Mercer and won by the British. A turning point in the New Zealand Land Wars, the battle and surrender of the Maori forces at Rangiriri is contentious, with historian James Belich suggesting the British took advantage of the raising of the white flag to force surrender rather than accede to parley. (1) Painted in the year New Zealand ‘celebrated’ 150 years since the signing of the Treaty of Waitangi, The Advance on Rangiriri draws together many of the threads that run through Shepherd’s practice including: the writing (and re-writing) of histories, social inequities and iniquities, the impact of colonialism on New Zealand.

The general composition of the work directly speaks to Charles Heaphy’s contemporaneous sketch of the battlements dug by the Maori in defense of their land. Shepherd’s bold use of two-tone hatching and strongly contrasting areas of light and dark immediately bring to mind a wood- or linocut. The artist disguises his oil paint medium to a certain extent, preferring the suggested immediacy of the printing process. The bleak angles of pits and mounds possess a physicality that Shepherd appears to have gouged out of the underlying material; the faceless individuals who clamber over and into the pits where the dead fell (the artist’s red ‘X’ marks the spot) seem more shadows than men. A small, realist landscape inserted into the right panel directly links the present and past.

Framing this barren landscape, Shepherd addresses the viewer directly, using the Sesquicentennial slogans “Our Country – Our Year”, “Huia, Tuia, Tui Tuia” to emphasise not only how short our historical memories are, but that history is – still – written by the victor. 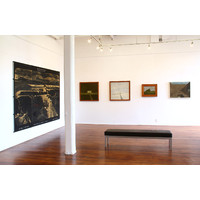 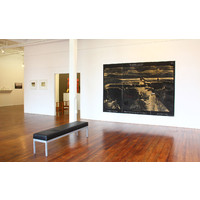 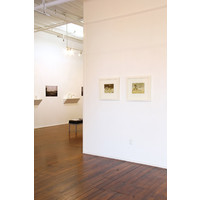