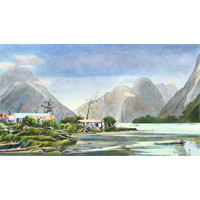 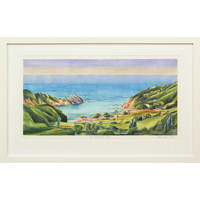 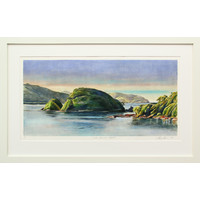 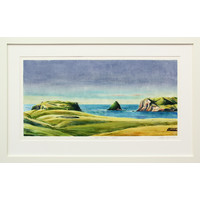 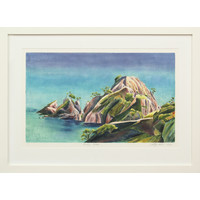 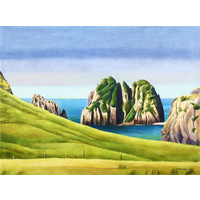 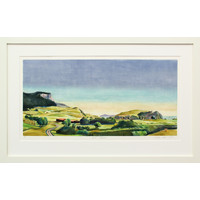 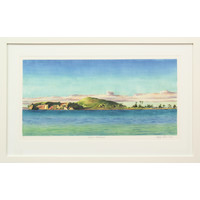 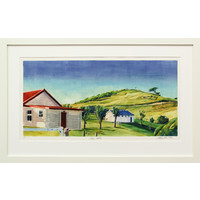 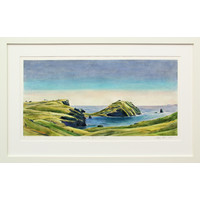 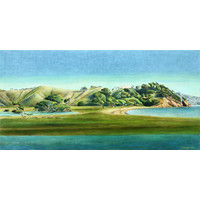 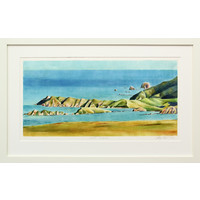 With a successful exhibition history that extends back to the late 1950s, Stanley Palmer’s place in the history of New Zealand art is assured. Palmer’s paintings parallel his long-standing print-making practice; both media capturing the essence and memories of the land.

After the Storm – Piopiotahi (2013) exhibits all the nuances of visual language viewers have come to expect from Palmer. The ramshackle buildings with their corrugated roofs are as much part of the artist’s vernacular as are the views across the mountains and sea. He uses built structures - roads, trig points, sheds, fences – to provide a point upon which the eyes can settle. Their human scale prevents the open, empty vistas of land from overwhelming the viewer and serve as reminders of time’s passing.

Rather than the wild untouched places of the country, Palmer depicts farmlands, where vestiges of native bush fringe the edges of bluffs and lonely cabbage trees cluster around a shearing shed. These remnants of forest combine with the empty outbuildings and rundown fencelines to suffuse Palmer’s works with a wistful nostalgia for a half-remembered summer or family holiday. This sweet melancholy is further enhanced by a soft, jewel-like palette and the delicacy of the artist’s brushwork.

The suite of monoprints reveals the print-making skills Palmer has honed over decades. A single print is taken from a stainless steel plate upon which the image is painted in reverse; there is very little room for error and, conversely, a fair amount of chance involved in the final product. The clear colours and abstraction of form give these works a fresh immediacy and the hand of the artist can be seen in the subtle textures of the inks.

Stanley Palmer paints a New Zealand landscape redolent with memory and his works draw on each viewer’s own recollections. These remembered cycles of time and tide are the artist’s subtle inducements to recognise ourselves in the bays, hills and headlands he portrays.