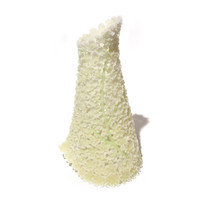 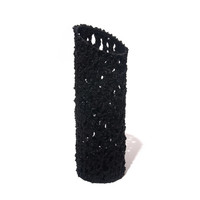 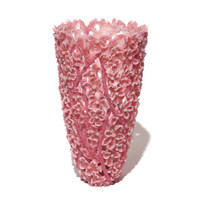 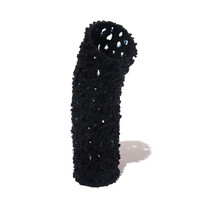 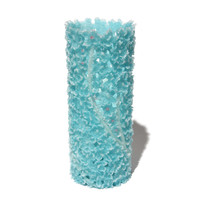 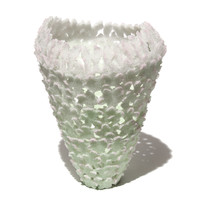 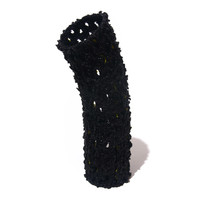 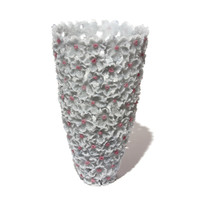 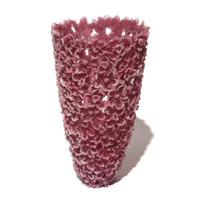 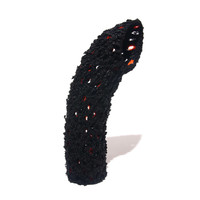 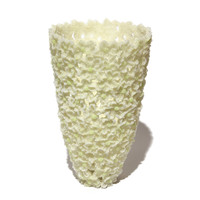 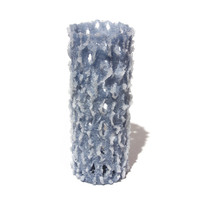 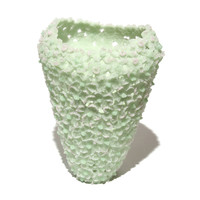 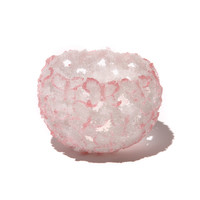 With her latest exhibition A Singular Occasion, Sue Hawker continues to push the boundaries of the pâte de verre technique. Hawker speaks of this suite of works as ‘portraits’ based on actual people (1). She uses form and palette to delineate individual characters and the interactions between them.

Hawker uses the visual traditions of a wedding to explore dialogues about the role of family and of the dichotomy between male and female. Large, floral vase forms in traditionally ‘feminine’ hues are cast as the female players in this ‘frozen’ theatre. The Bride evokes (through its very title) thoughts of tulle and figured satin and Hawker plays on this with her use of massed blossom shapes in translucent lemon to suggest the sweep of a veil and the train of a gown. The drama of the form sets it apart from all other works while the repetition of floral patterning and soft hue clearly links it to the other flower-bedecked ‘females’.

The new columnar forms are assigned masculine roles and an element of phallocentrism can be read in their strongly defined shapes. The glittering black and upright stance of the cylinders are reminiscent of sober suits and the curved tops of the Likely Lads suggest an animated camaraderie as they lean in to one another. The pops of primary colour Hawker has used in the three works link them further, at the same time differentiating them from the groom figure, He Does. Each of Hawker’s works plays its part in this stylised ritual, their individual characters speaking to one another to create a unified whole.

The works in A Singular Occasion reveal the breadth of Sue Hawker’s ability to imagine a myriad of possibilities to be explored and her technical excellence in a demanding medium enables her to turn these into realities.