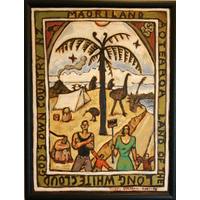 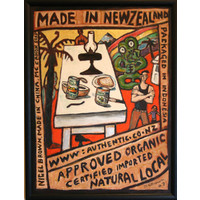 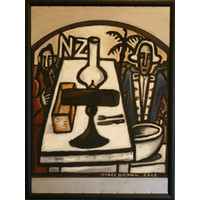 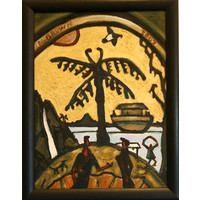 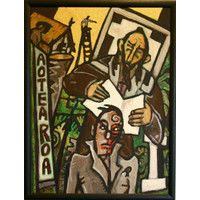 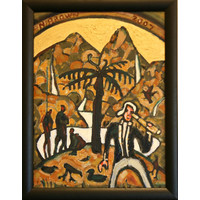 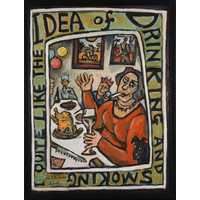 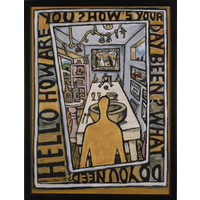 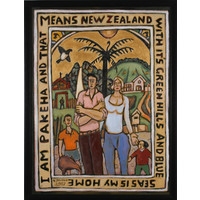 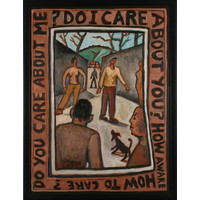 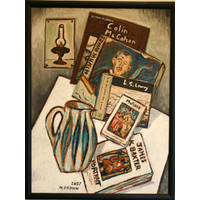 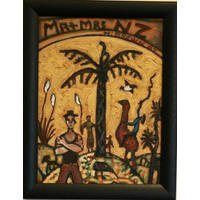 Nigel Brown’s latest exhibition, Conversation, witnesses the artist’s constantly evolving dialogue and exchange of ideas. Brown’s distinctive language and iconography is revealed and reinvigorated in a blend of the familiar and new; it is this constant exchange/discourse of ideas and perceptions that gives both purpose and meaning to Brown’s art. ‘It follows that to paint it again and again is constantly to renew it, to change what it emanates – its hum, its resonance of meaning.’ (1)

Brown has built his own distinctive narrative utilising icons that illustrate and celebrate New Zealand culture in a social dialogue. Intuitively constructed scenes express New Zealand’s defining aspects and examine the humanistic concerns common to all. In Gods Own Country iconic figures such as the black-singleted man accompanied by a woman and two children (the archetypical nuclear family), a moa, tree fern, kereru, tiki and kiwi represent core essences while text seeks to answer fundamental questions of identity in New Zealand. Symbols and figures laden with meaning in I Am Pakeha complete an ‘iconography of faith’ in what is essentially a celebration of being Pakeha in New Zealand. (2)

Common identifiable key protagonists make repeated appearances in Brown’s paintings. A principal figure since the 1990s, Captain James Cook signifies issues relating to colonisation and the intuitive versus the rational. Strive And Endeavour not only refers to the motto of the secondary school Brown attended but most importantly raises the wider social issue concerning the depth of New Zealand’s historical cross-cultural consciousness. By inserting Cook in a setting that resembles William Hodges’ Maori Before A Waterfall, Brown challenges Cook’s legend and place in history as heroic explorer in So Much Undiscovered, Unseen.

The significant influence of Colin McCahon is often acknowledged by Brown not only through the incorporation of text with visual imagery which was a feature of McCahon’s work, but also through the appearance of icons such as the lamp as seen in Made In New Zealand and New Zealand Table.

New Zealand poet James K. Baxter also has a recurrent presence in Brown’s work. Often portrayed empathetically as the outsider as well as a spiritual presence or prophet, Baxter is set beside Cook in New Zealand Table. As disconnected figures, an ordinary domestic table further creates a narrative barrier between Cook and Baxter yet simultaneously provides a ready platform for discussion and social interaction. A stainless steel arch elevates the work to the sacredness of a cathedral stained glass window. In homage to Baxter, Poet Framed sees the poet positioned above the artist. A wharenui, ferns, a man on a ladder reaching for the heights, and birds frame the figures adding to the suggestion of the work being a reading about identity.

In a revisitation of his 1970’s Table series, we see Brown once again celebrating familiar daily routines associated with family life – such as the family dinner – and exposing complex social interactions. Hello How Are You? seeks to engage the viewer in conversation with before a table laden with symbols manifest in meaning; Drinking And Smoking observes the interactions of participants at an indulgent and raucous party; Made In New Zealand portrays a table weighted with symbolism as the artist’s own political statement and discourse regarding the debates of organic versus genetically modified food, New Zealand products manufactured overseas, as well as issues surrounding identity.3