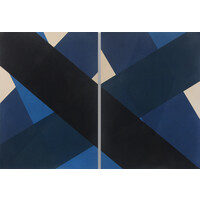 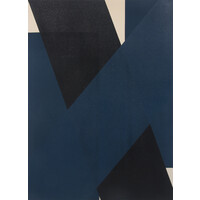 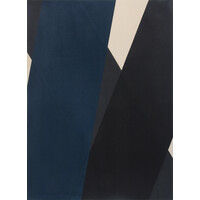 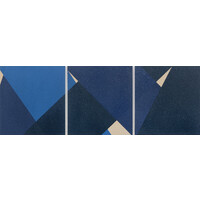 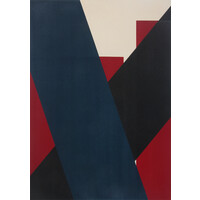 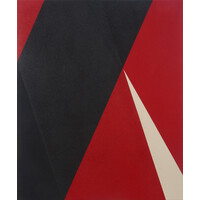 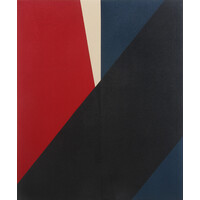 There is much in Leanne Morrison's work which speaks of minimalism and geometric abstraction, but these obvious influences are only a part of Morrison's art.

For Morrison, a painting is not a complete discrete object, but is part of a surrounding environment. Her strong linear forms defy the edges of the canvas, simultaneously emphasising the construct of the frame and allowing viewers to consider her works escaping from their surrounds to flow across the gallery. This is particularly the case with the two multiple-canvas works in this exhibition, West / East and Save the Last Dance for Me. In all of the works, however, there is a feeling, especially when viewed from a distance, of looking at a small part of a much larger work, that the paintings are somehow only seen in part through windows into some other dimension.

Morrison has concentrated in this exhibition on the colour blue, which to her represents feelings of openness, optimism, and potential. During the painting process, her mind was also on the concept of transition, a moving from one place or state to another. This sense brought about by the death of the artist's father. In the artist's mind, blue has become a symbol of natural transition: our days are marked by changes in the blue of the sky from dark to light to dark, and the changing of shallow to deep water is expressed in blue tints and shades (1).

Morrison works in such a way as to retain an aleatory element. There is no absolute certainty in the works as she creates them; the resulting images are often a surprise to the artist. As such, there is an air of freshness about the works which is often absent in such geometric constructs.

The study of colour, texture, and form, and especially the interaction between colour and texture, are central to the artist's oeuvre. Paintings are built up with multiple soft layers, which are overlaid to create illusions of depth. Areas are blocked off with tape during the process, the overlays producing areas of opacity and transparency (2). These overlays, and the multiple thin layers of paint applied, give a depth and luminosity to the works. What might be expected to appear static has subtle shifts and dynamism, the paintings changing appearance as the observer moves around them. Morrison's usual diagonal stripes have been complemented by bold verticals in paintings such as Red Sky/Black Night, these seemingly solid and immovable columns only emphasising the apparent movement implied by the diagonals (3).
1. Artist's statement, 2022.
2. Rebecca Fox, "Heart and Soul", Otago Daily Times, 11/4/19.
3. Artist’s statement, 2022.
All images and text copyright © 2022 the Artists & Milford House Ltd.