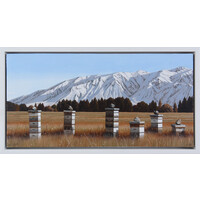 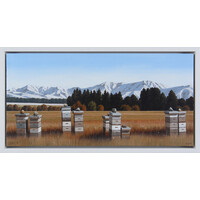 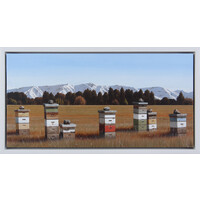 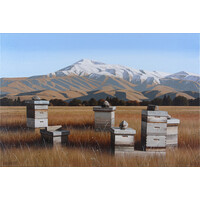 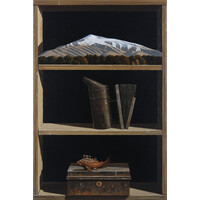 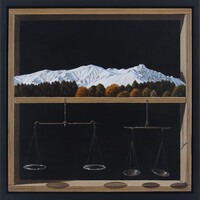 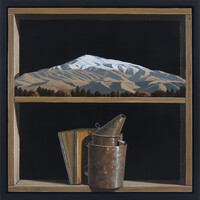 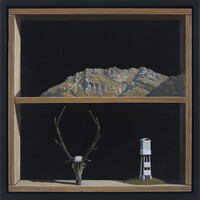 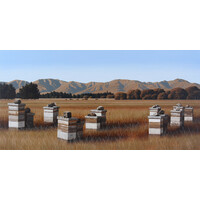 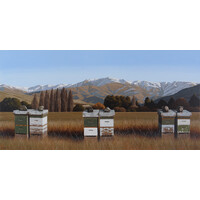 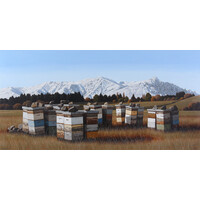 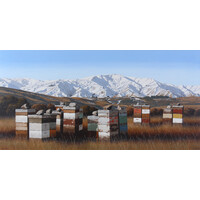 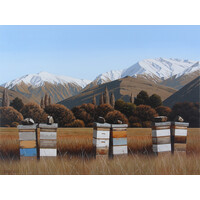 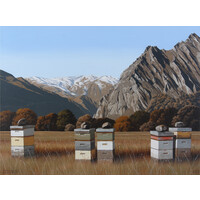 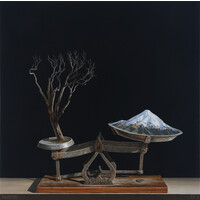 Michael Hight's landscapes are finely captured images of rural New Zealand, and simultaneously allegories of the symbiotic link between human industry and the natural world.

Hight's paintings dwell on the breathtaking beauty of the land at the point where the tamed pasture and untamed wilderness meet, and also focus on beehives. Bees are a farmed animal yet - unlike the sheep and the cow - ostensibly both wild and alien to human ways of thinking. And here, the bees are absent from the scene, perhaps fled to the wilds, perhaps dead. Beehives represent industry, but the bee is a communal creature which is only really complete as part of a larger organisation, the hive, bees seem distinctly different from our closer mammal relatives. There is, however, an ironic comparison which can be made with human city life: in our urban "hives" we are isolated from and largely ignorant of the wilds of nature.

We are a long way from truly taming the land, even though we arrogantly like to consider ourselves masters of it. The wild grandeur of the inland South Island is rugged and unbending, just as it is beautiful, and in Hight's paintings, its colossal nature is clearly contrasted with the small dents which agriculture (and apiculture) seem to have made upon it. Agriculture is symbolically separated from the body of the land by lines of trees, cutting the foreground off from the background of each image. The lack of human impact is illusory, however; Hight is all too aware that, although we cannot control the land, humans can cause and have caused much harm to the natural world. Again, the endangered bees become symbolic of this harm. Their absence from the art powers the message of peril and risk.

Hight has returned his focus to the landscapes of Central Otago. Resplendent in bistre browns and clear white snow, The Remarkables and the Crown Range form the grand backdrops for Hight's hive henges, and in the memorably composed Gibbston Valley, the Nevis Bluff adds its imposing bulk to the landscape.

Hight's cabinet images are intriguing double-edged surrealist pieces. Literary in nature, they can be read on multiple levels. In these works, the land and the instruments which are used upon it are pigeonholed like thoughts in a box of our memories, able to be picked out and mentally examined and mused upon. The tools are discarded, antiquated — they tell of the history of working the countryside. The mountains, tools, and objects become totems of the land, like images from an antipodean Georgia O'Keeffe. They also evoke thoughts of the artefacts in some Victorian museum. It is as if the artist is saying "treasure these memory traces, for they may someday be the only relics of the land we have to enjoy".