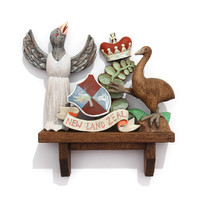 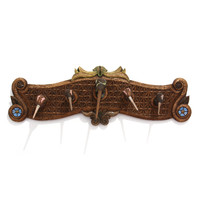 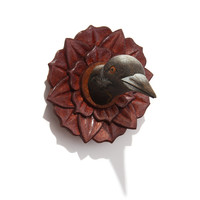 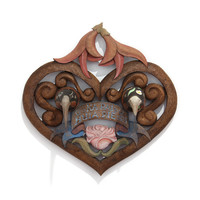 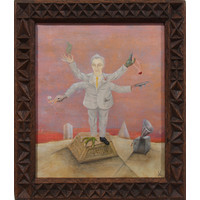 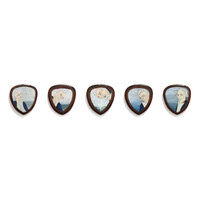 Harry Watson beautifully weaves together the threads of colonialism and Māoritanga in his art. A self-taught carver, his work mixes traditional Māori woodworking styles with Victorian chip-carving. His small works are inspired heavily by mediaeval church art - a major early inspiration for the artist - yet are deeply informed by New Zealand history and speak in a strong kiwi vernacular. The interplay of pre- and post-colonial makes powerful statements which link with the work of other artists ranging from Chris Heaphy through Nigel Brown to Bill Hammond. The works are deliberately created using old tools, providing an added link to the past. As Watson says, “When I go into the workshop it's as though I go into the past using old methods to dwell on old times [….] I find it interesting to know that a nice sharp chisel has been cutting through wood longer than I've been alive.” (1)

The artist leaves the works entirely to the viewer’s interpretation, stating that there is “no statement where it verges on the decorative”. (2) Despite this, it is hard not to read broad statements about New Zealand turbulent social history into his works, both in terms of the destruction of the environment and the attitudes of the settlers to the country’s Maori inhabitants and their way of life. Native birds and introduced species abound in ways which are simultaneously light-hearted and deeply poignant, and their interactions reflect strongly on “native” and “introduced” humans. The birds become metaphors for the mix of cultures in post-colonial Aotearoa, and are shown as being the true owners of this land, owners that both Māori and Pākehā have often driven to the point of extinction.

Historical characters also make frequent quirky appearances - in this exhibition they are represented by a series of cameos of James Cook, his journey to these shores being, as the title of the works suggests, a “Pacific leap of faith”. Again, there is humour in the presentation of the pieces - these are no formal portraits, but instead Cook peers around the corners of the heart-shaped frames or is caught off-guard by a surfacing whale. As such, the works attempt to strip away the po-faced facade of history to capture both the reality and the surreality that is hidden behind it.