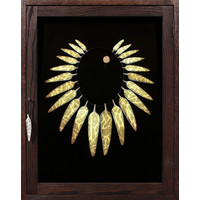 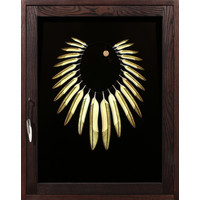 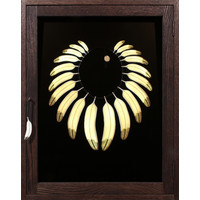 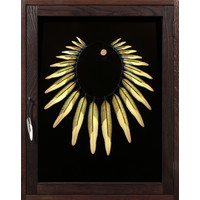 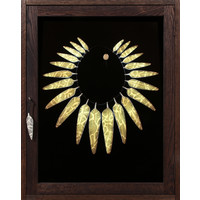 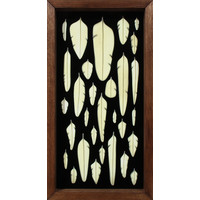 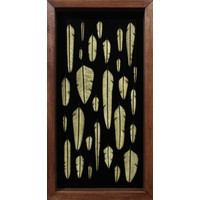 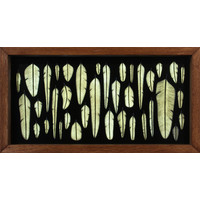 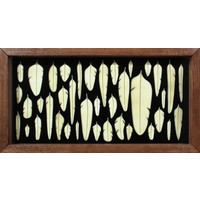 Since bursting onto the New Zealand art scene in 2011, Bridie Henderson's work has mainly concerned the subject of feathers. Henderson’s feathers are created from delicately worked porcelain and displayed in handmade wooden cases that resemble traditional museum displays. They are softly backlit to show off their finely worked detail and their delicate, fragile nature.

The individual pieces are presented both in parallel arrays and in the form of necklaces, and are painstakingly carved and coloured to effectively mimic the ribs and tints of actual bird feathers. The light and dark patterns transcend the boundaries of individual feathers to produce designs which link the individual blades into a gestalt, a whole greater than the sum of the parts. Motifs are created across the arrays, so that it feels as if we are not glimpsing individual feathers presented against a black background, but rather we are looking through feather-shaped windows at some more all-encompassing design beyond the black.

There are multiple narratives at work in the pieces. Though ostensibly inspired by Native American cultures, the totem of the feather is found throughout the world, including in the use of the white feather as a symbol of peace and passive resistance among Maori during the Taranaki War. Within the wider Pacific context, the necklaces also carry symbolic memories of the Samoan ‘ula or of the Hawaiian lei, presented as a symbol of love and friendship upon arrival or departure.

The works’ backlit wooden cases are reminiscent of museum displays, bringing to mind the collecting of artefacts by European explorers as curios, symbols of a bygone time or an extinct race. There are echoes here of the story of pioneering New Zealand ornithologist Sir Walter Buller, taking specimens of rare birds so that he could record them before they inevitably died out - in the process probably hastening their demise. Are we witnessing the last records of a dead people, preserved only for the stares of the curious? Are the necklaces, by implication, loving farewells from those who have departed?

Despite the cues and clues, no direct explanation is given by the artist as to the nature of the feathers or their wearers, or any symbolic meaning the artefacts might have had. We, as viewers, are left to fill in our own subjective back stories to the work.