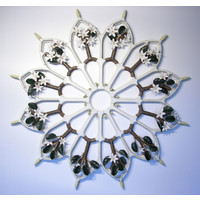 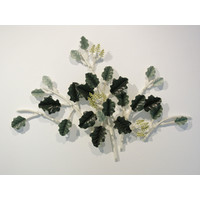 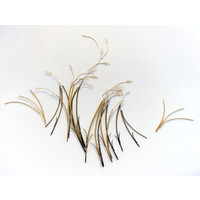 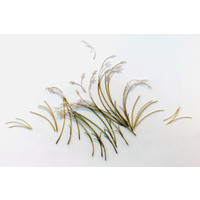 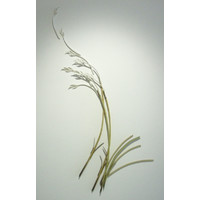 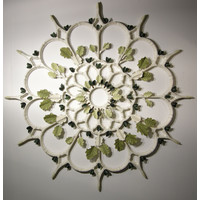 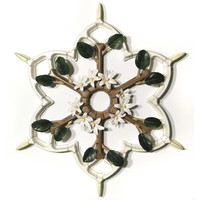 Tim Main has emerged onto the national stage with a sculptural language, environmental concern, architectural dialogue and a unique overall sense of style already developed and formed. He is like no other three dimensional artist in New Zealand and as such he demonstrates a virtuoso command of differing media, an array of skills as various as hand carving, tenon jointing, and painting and a wonderful lightness of touch.

“Southern Forest I” (2007-8) is by any criteria a masterwork. At its simplest Main has combined the religious architecture of a gothic rose window and the environmental narrative of the leaves and flowers of two native plants and trees. Form and pattern is repeated in a geometric manner. The varying scale of four circles growing from the centre out spin and animate the work. Main’s musicality and deftness is revealed in the subtleties and expressive tonal nuances and located in his weighting and abstract placement of the leaves and flowers. In “Clematis II” (2008) Main intervenes by subverting the window pattern with linear elements which lead the eye to the rim of the work. There he places in a radiating act of celebration the clematis flowers in settings of olive coloured leaves. “Clematis III” (2008) is simpler yet resolute with a garland of flowers in the middle. Inside the edge of the window he has two leaves which reach out of the form and so alter space, repetition and pattern.

The fundamental role played by medieval architecture is completely replaced by gesture and motion in “Composition with Grasses V” (2008) and “Composition with Grasses VI” (2008). Each of these works attains the profound sense of a handful of grass being thrown to the wind, of flying. There is the smell of summer, the presence of a breeze and inevitably you come to watch it catch the stalks and start to alter what is being seen. This compelling intensity of moment and event is delivered by Main with characteristic restraint.

“Composition with Rangiora” (2008) positions itself between these two bodies of work and is strongly suggestive of what will be attained and gained for Main by foregoing the referential architectural language of pattern.
All images and text copyright © 2021 the Artists & Milford House Ltd.