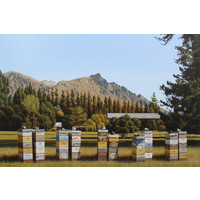 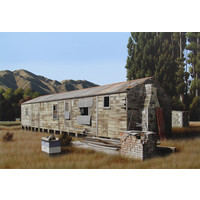 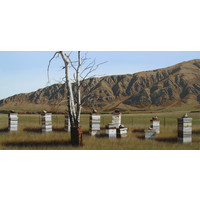 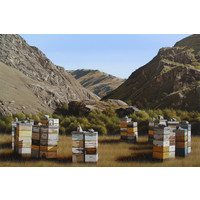 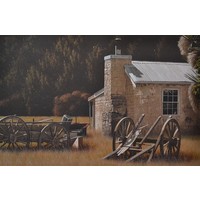 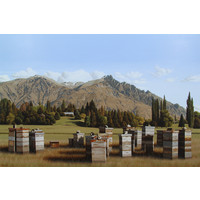 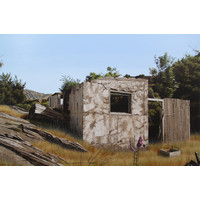 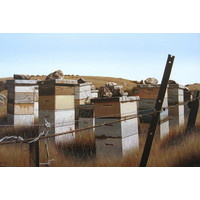 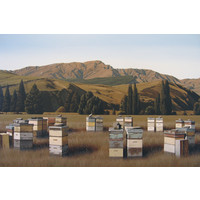 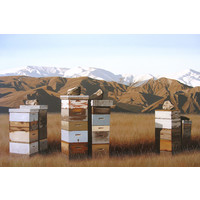 Michael Hight continues his investigation into the landscapes of Central Otago with a new suite of paintings. As well as his signature beehives, Hight extends his gaze to the natural and manmade forms of the landscape.

The Kawarau Gorge provides a setting for a clutch of Hight's beehives, and those familiar with the area will recognise the stark rock outcrops and scrubby brambles, flush with summer growth. Using the rounded forms of these wild rose bushes as a foil, the strong geometry of the hives and geology are thrown into sharp focus. The tones of the hives mirror the clear sky and sunburnt grass, while their angular forms echo the faceted shadows on the mountains. Implicit in its title, Kawarau Gorge brings with it echoes of colonial histories

Depicted with the same attention to detail seen in the weathered wood of his beehives, the mud-brick cottage, dilapidated wagons and backdrop of introduced pine in Hawea Flat tell a personal history as well as a history of the land. The golden tones of summer grass and a profusely flowering cabbage tree place the painting in a specific season and draw the mind to the inevitable autumn and winter to follow. Rather than the here and now, Hight emphasises the slow passing of time and its effects on both man and land.

Michael Hight makes close and careful observations of the land, using these to comment on wider histories of both the human and geological environment. His thoughtful and increasingly detailed paintings reveal layers of story as do the landscapes he depicts, inviting considered contemplation rather than a passing glance.