Here is Always Somewhere Else 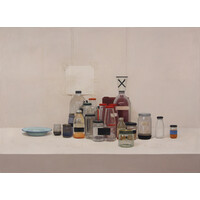 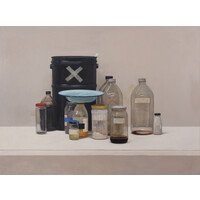 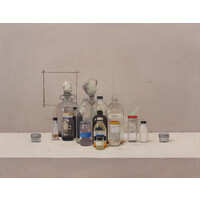 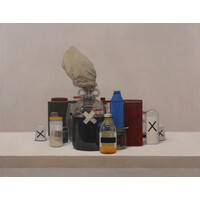 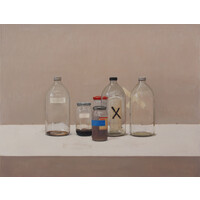 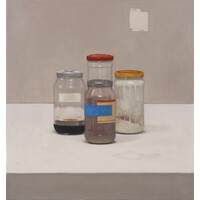 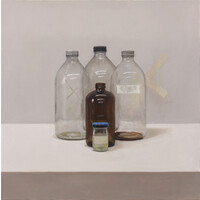 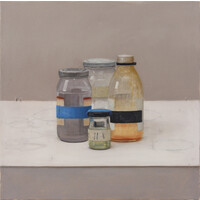 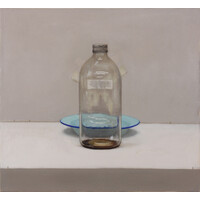 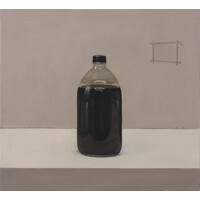 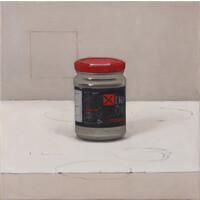 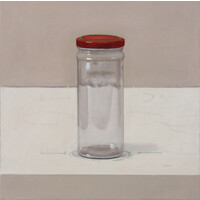 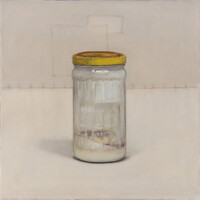 Damien Kurth’s paintings are an homage to the mundane, stage sets populated by jars and bottles. The quotidian objects are unremarkable, but there is nothing unremarkable about the way in which Kurth has portrayed them.

Kurth’s early interest in sculpture as an art practice is evident in the way the vessels are arrayed and the way their surfaces are treated. There is a fascination with shape, tone, and placement, and in the way different objects within the picture plane interact with each other. Though the settings are reduced to an almost zen-like simplicity, the individual vessels are full of vitality. Like the rag-tag characters in a Brecht play or the unfamiliar skyline of a foreign city, every item holds its secret. With indecipherable labels and unrecognisable liquids, it is up to the viewer to decide on what the contents and purpose of each item are, and why they have been precisely grouped in such a way. Adding to the mystery is the symbolic "X" with which many of the containers are marked. The perplexing titles, connected with vehicle models and makes, only add to divorce the objects from their origin and to imply a new context. The familiar objects become unsettling, challenging the viewer to see them in a new light for something they could be, rather than what they usually are. In the smaller works such as Colt and Catalina, each focussing on a single vessel, the containers become almost confrontational.

Kurth is playing with us and with our assumptions. The works deconstruct the normal conventions of still life, presenting us not with fruit or flowers but with objects usually regarded as bland, if they are regarded at all. He has placed uninteresting objects centre stage and focussed our attention on just how interesting they really can be. The artist has deliberately removed each item from its natural setting, placing it into a context where both artist and viewer can see the item as part of a new narrative. Backdrops have been implied rather than stated, in some cases seemingly reduced to simple horizontal divisions of the picture plane. In works such as Coronet and Dodge, the backgrounds have been augmented by preparatory drafting lines, as if to suggest that the work is incomplete and also to confound the accepted trickery of painting, which is to make us forget we are looking at an image. There is also the subtle suggestion that, while these are normally kitchen containers, they are taken from within the artist’s studio. We thus may be seeing the substances of the painter’s trade alchemically transformed into the painting that is their final product.