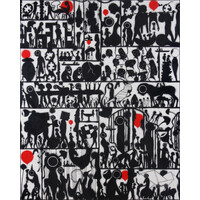 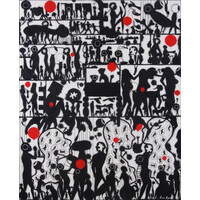 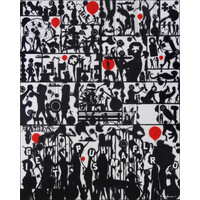 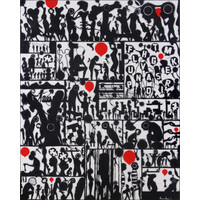 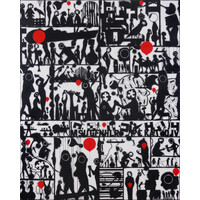 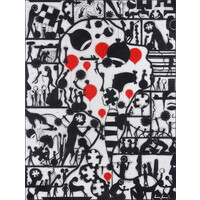 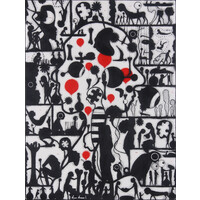 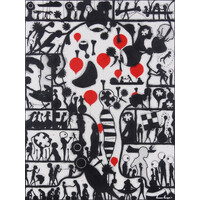 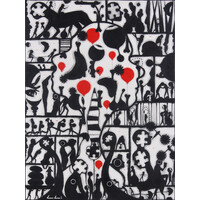 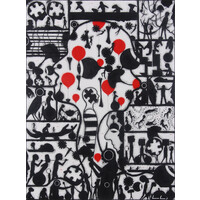 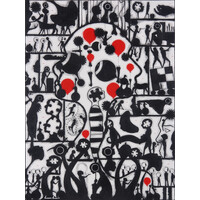 There is a timelessness in the esoteric forms within Andy Leleisi’uao’s art. Yet for all the trappings of ancient hieroglyphic mystery that the works contain, there is also an immediacy. These works, couched in the artist’s potent yet mysterious language, are poignant reminders of today’s society and today’s societal concerns.

Leleisi’uao’s art is strongly narrative, taking inspiration from early pictorial languages around the world. Drawing from influences as diverse as Lascaux, ancient Egypt, and the pre-colonial Pacific, his images are strong yet enigmatic, alien yet universal.

In his latest works, the artist shows a development of his style hinting at the potential for further changes to come. Whereas previous images have been essentially two-dimensional the scenes enclosed within comic strip-like panels, the current exhibition shows large two-faced outline figures which have transcended these boundaries, in doing so implying a depth that breaks the picture plane. These heads are particularly evident in works such as Discussions on Mysterious Lanes and Conversations on Bewildering Roads, in which the otherwise monochrome works’ only colour, a rich yet ominous vermilion, is found entirely within the outline heads. The heads take on added three-dimensionality in the Contemplation People works where they become a middle ground between the narrative frieze and dark foreground silhouettes.

Alphabetic letters are also present for the first time in this work, hinting at the possibility of communication between the depicted characters, and also between those characters and the viewer, though the message remains only half-glimpsed. It could be that the letter-carrying figures are the "Conciliation Gatherers" of the exhibition’s title, and the painting titles reflect this with their "conversations", "interactions", and "exchanges" on various obscure transitways.

There is a growing maturity in Leleisi’uao’s art, a strength which is evident in the coherent structures within the paintings and the impressive narrative flow of the works. Leleisi’uao has created a strong reflection of the challenging and contradictory times in which we are living, and his works hint at a hopeful unity and progress, perhaps one suggesting that the chaotic environment which led to the community spirit of the "team of five million" is one in which the dream of a united multiethnic society survives. Whether this ideal is to be achieved in a later series of works is perhaps locked within the mysteries of the artist’s current fascinating and endlessly enigmatic dramas. 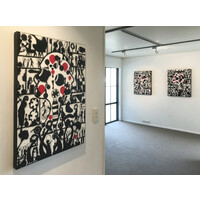 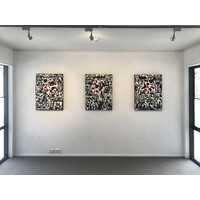 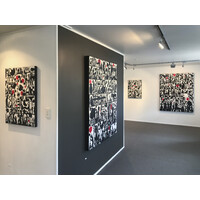 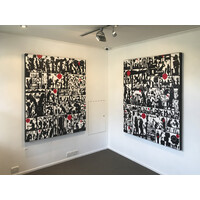