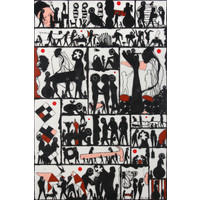 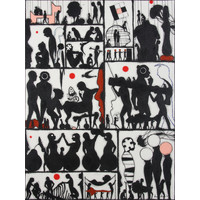 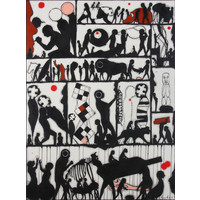 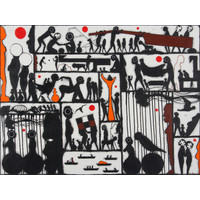 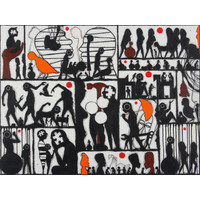 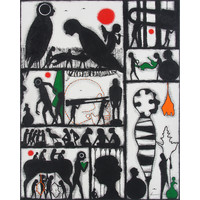 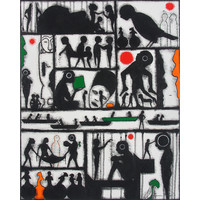 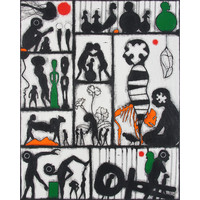 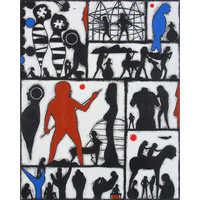 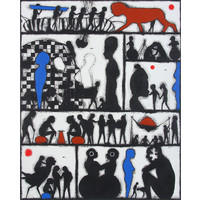 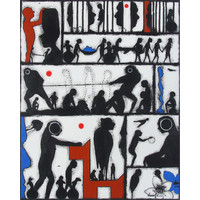 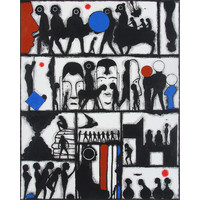 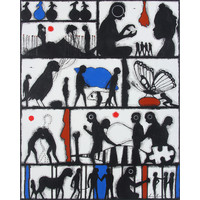 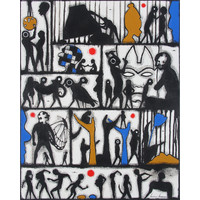 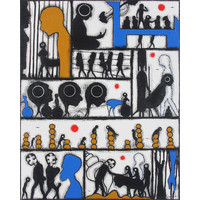 Andy Leleisi'uao's latest paintings extend his hauntingly enigmatic, hieroglyphically inspired series. The artist has created a language where strands of pre-European Pacific and Bronze Age Mediterranean art mingle and intertwine, producing friezes in which silhouetted figures engage in communal activities. Using a minimal palette dominated by black and white, the works fall into a strange hinterland between Lascaux and "Peanuts", tapa and Etruscan pottery. The current paintings build on his earlier images to flesh out his world and to use it to pose questions of our own existence.

The works have narrative plots, without any easy translation. But, as in ancient hieroglyphs, there are enough clues to cue the viewer in to the hermetic mysteries within. Coherent activities are taking place, with the works controlled by their own internal logic; the images feel familiar but alien. While facets of the work clearly have esoteric questions, there are also clear points about how individuals reflect society and how society affects individuals.

We are glimpsing views of the here and the hereafter. Like Hieronymus Bosch strained through a Polynesian sieve, they create a distinctly Pacific view of life and death, reward and punishment.. Heaven and Hell conflict and intermingle, with Earth being - and being weighed in - the balance. We are asked questions of the nature of reality and unreality, of history and mythology. Of prime importance, however, is the gap left between image and the viewer's interpretation of it. The viewer becomes an integral part of the work, and their psychhological interpretations and responses become key. The more the works are viewed, the more early thoughts about what is shown disappear, to be replaced by larger ideas of the nature of the worlds the artist has created.

In his latest exhibition, the sense of narrative is strengthened by Leleisi'uao's grouping of the works into a series of "melodies" - each of which consists of several canvases using the same strict colour palette. We get a sense of individual stories, possibly those of different lands or peoples spread in the titular clouded diaspora, separated by the simple conceit of palette choice. The spread of the artist's world becomes an analogy for the spread of Pacific peoples, and the emergence of distinct cultures within each society.

The images themselves, with their implications of choice and fate, produce scenes which are somehow simultaneously Kafkaesque and liberating. The anguish is now accompanied by hope and optimism. Much of this optimism is likely a reflection of Leleisi'uao's own situation. His winning of the prestigious Wallace Award has added a new confidence and assuredness to the works. Experiments are no longer tentative, and the artist is now playfully working with size, scale, and composition. Long river-like frames appear alongside squarer blocks within works such as Harmonic Melody Part II; runnels of paint are used as a compositional element in pieces like Homonia Melody Part I.

Perspective is eschewed almost completely - in a way akin to pre-Renaissance art, apparent size does not suggest distance, but rather psychological importance of objects in a two-dimensional domain. Colour, where it is used, is there to add a theatrical intensity, to focus the eye on some detail as if to say "this is the key". The features and facets in these works continue to haunt the subconscious long after the works have been seen. 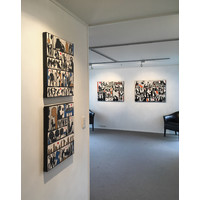 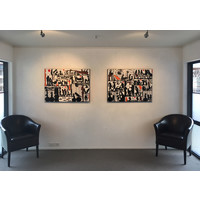 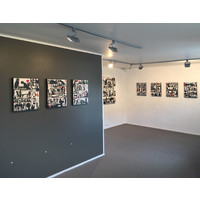 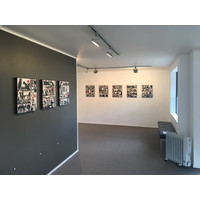 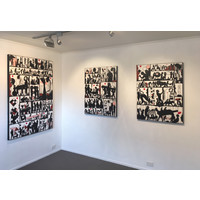 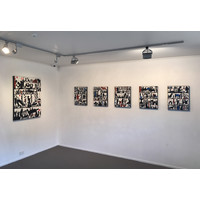 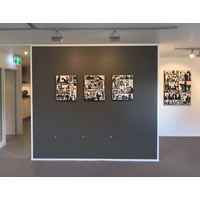 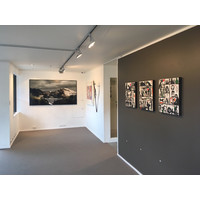