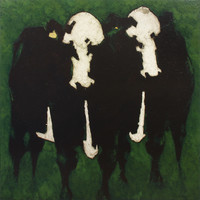 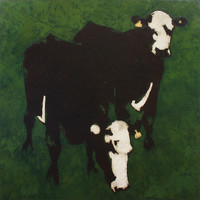 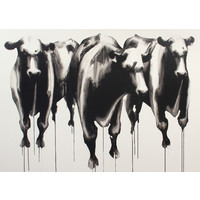 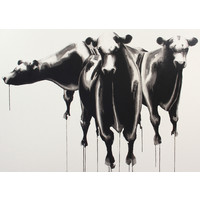 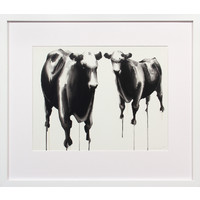 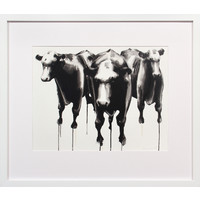 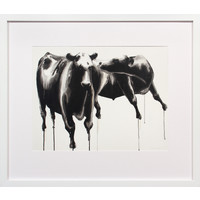 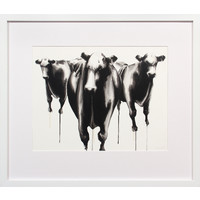 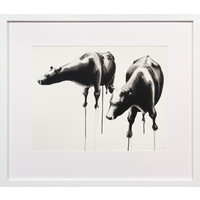 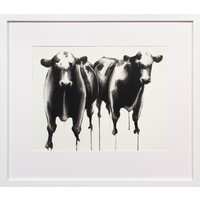 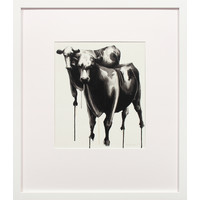 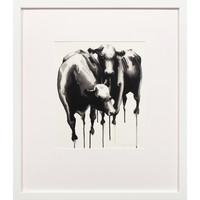 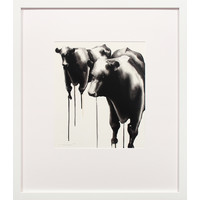 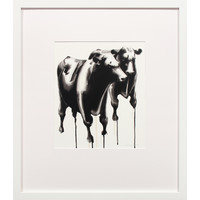 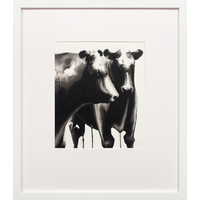 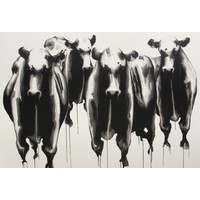 Is there a creature which more prosaically exemplifies our connection with the land than the cow? From our daily digestion of milk to the environmental impact of cattle on our waterways, our symbiosis with these creatures has been both a blessing and a curse for human and bovine alike.

Mike Petre, in his continuing series of studies of these hefty, noble beasts, poses questions about our relationship with the land. He has created a personal visual language in which the cow is representative of the harnessing of nature yet - by the artistic placement of the creature against a blank canvas - distinctly removed from any natural condition.

Petre, who grew up surrounded by cattle in the rural King Country, views these animals with an eye which is simultaneously objective yet compassionate. The animals have become demythologised, removed from the bucolic classical landscape which they inhabit in European art, and are painted as arrangements in black and white, albeit arrangements with strong personalities. The punning title of “field study” becomes even more appropriate as the weighty negative space of the canvas forces us to scrutinise the cattle, sensing their individual identities.

The mixed media of the black and white works show the artist’s approach. Graphite lines remain from the initial sketching, overlaid with acrylic, ink, and oils, producing marks in deep pools of black which run and bleed down the surface. These give the impression of cows seen in heavy rain, and also present a disturbing hint of the bloody fate that awaits many farm cattle.

In this latest series, viewers are presented with massive panoramic groups of animals, their forms twisted as they stare away from the observer. The distorted perspectives of these groups removes the creatures even further from any natural reality, whilst simultaneously the psychological weight of the cows seems to have increased. This weight is also present in the smaller works, ins one of which the white of the canvas is almost totally obscured by the bulk of approaching cow.

Two works in the series use a drastically different approach to the subject. In these, the cattle are presented in a heavily worked and thoroughly painterly style against a deep green background. The cows here are totally absorbed into nature in a way which emphasises even more thoroughly the isolated nature of the subjects of the monochromatic works.