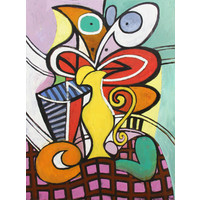 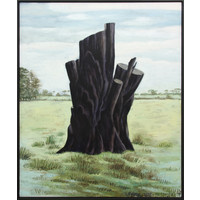 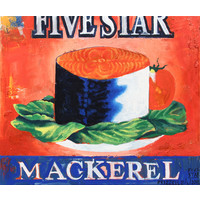 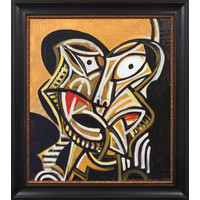 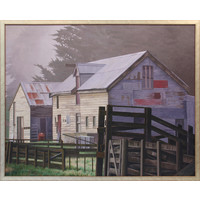 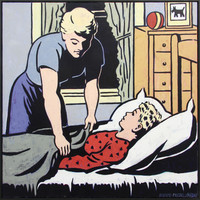 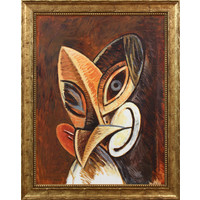 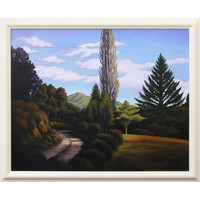 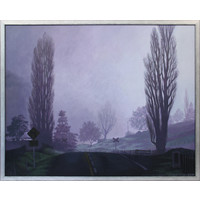 Misty Morning on the Forgotten Highway (2015) 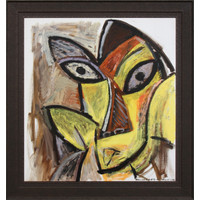 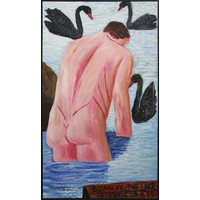 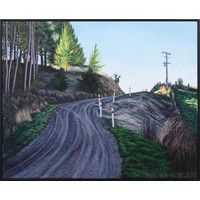 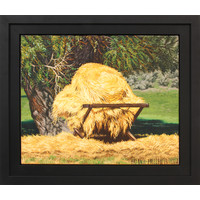 Drawn from the last twenty years of Dick Frizzell’s practice, this selection of works encapsulates the varied styles and diverse content he has engaged with over time. Frizzell’s overt references to pop art, advertising, art history, artistic conventions, are readily accessible to the viewer of his works. His subversion of these very same concepts lies just beneath the surface.

The landscapes seen in this show do not depict expansive vistas or grandiose mountain ranges. Frizzell has focussed on places that are of no special consequence: the corner of a metalled road could be anywhere in the rural hinterland, as could the dilapidated woolshed and yards. These are the forgotten corners of the land, the sort viewed from a car window on the way to more spectacular scenery further down the road. Frizzell celebrates the road signs and scrubby verges of these forlorn places; his paintings suggest that they are just as worthy of contemplation as the majestic beauty of the Southern fjords or the overwhelming power of a raging Otira Gorge.

The black stump of Kiwi vernacular is given pride of place in Burnt Stump (1999) and the viewer is literally placed “this side of the black stump”. The knotted macrocarpa trunk in its empty paddock speaks volumes about the impact human activity has on its environment in general, and the role agriculture has played in the history of New Zealand in particular. Divested of black singlet and gumboots, the Kiwi bloke also makes his appearance in Down by the Lake (1985). The viewer looks down on the naked, stooped man, acutely aware of his vulnerability. Frizzell feels no need to air-brush the figure, whose buttocks and back take on the appearance of slabs of ham, emphasised by thick brushstrokes and bright pink tones.

Irrespective of their subject matter, Frizzell’s paintings are instantly recognisable and unified by his distinctive style. Short, defined brushstrokes are employed to build up the sides of a road cutting as well as contouring the eyes of a Cubist-inspired Pascoid Tiki. The thickly textured surfaces of paddock and sky in Burnt Stump (1985) re-appears in the pop-art inspired Bedtime (2008). Each painting possesses a clarity of colour and light, regardless of whether Frizzell is portraying shadows falling across a landscape or an advertisement for mackerel.

The bright colours and curved forms of Le Grand Tiki (2013) explicitly reference Picasso’s 1931 work Grande Nature Morte au Guéridon. At the same time however, this and the Pascoid Tiki paintings are distinctly self-referential, with Frizzell alluding to his controversial Tiki series of the early 1990’s. These explored, amongst other things, issues of cultural appropriation and asked questions about the production and re-production of art as a commodity. These same themes are present in Frizzell’s, where the artist takes the tropes of ‘low art’ and re-presents it in a ‘high art’ setting.

In the same vein as Duchamp and Warhol, Dick Frizzell deliberately subverts artistic traditions which deem certain subjects worthy of representation. He takes a wry look at the physical, intellectual, and cultural landscapes that surround him and chooses to paint what he wants, how he chooses.  Frizzell’s paintings reimagine the unloved and overlooked, the ubiquitous and unremarkable; upon his canvases they become subjects whose everyday stories also deserve to be told.