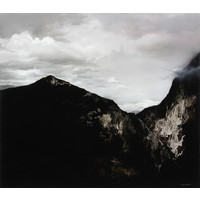 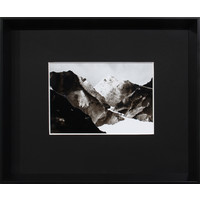 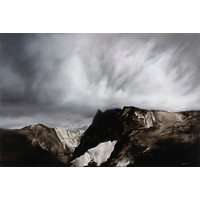 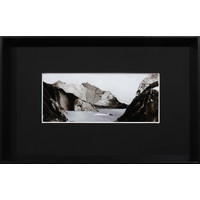 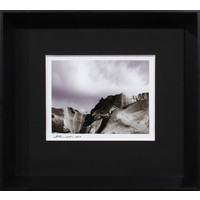 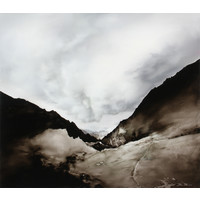 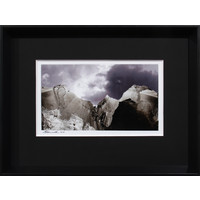 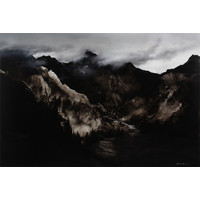 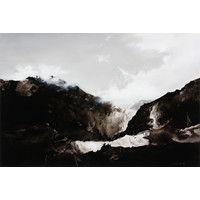 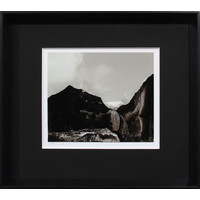 Simon Edwards pushes the boundaries of his painterly practice in this show of new works. Drawing upon his initial sketches and ink collages, he investigates the role of chance in his painting process, embracing the serendipitous and accidental in his mark-making. The paintings in Ivory Towers possess an immediacy and restless energy which stems from these visible actions of the artist’s mark-making.

Hints of Van der Velden’s brooding landscapes can be sensed in these works, but Edwards retains a clarity of line which brings the silhouetted peaks into sharp relief against an expanse of overcast sky. His striking use of chiaruscuro combines with this to flatten the mountain forms, recalling the two-dimensionality of his collages. In Broken Valley the dark slopes divide the picture plane into distinct planes of perspective and act as a gateway to the distant points beyond. In contrast, the looming mountains of Ivory Towers concentrate the viewer’s attention on the textured renditions of the alpine landscape in the fore- and mid-ground. There is a suggestion of what lies beyond, but it is the immediate, scarred presence of the mountains that draws the gaze.

Like the Romantic painters of the nineteenth century, Edwards’ landscapes invite the contemplation of the sublime – that potential transcendent moment where the terrible and the beautiful are combined. His works establish an intimate space in which to experience the monumental. The physical expressiveness of Edwards’ painted surfaces acts as a parallel to the physicality of his subject matter. Just as the jagged mountain ridges are visible reminders of the never-ending geological processes that create and deform the alpine landscape, Edwards’ assured techniques remind the viewer of the active processes of applying paint to a surface or the assemblage of a collage.

Ivory Towers captures the vagaries of the artist’s hand and of the landscape. The works invite us to question our relationship with the wildernesses of the world and to consider the intrinsic beauty and value of the untamed environment. Through his paintings, Simon Edwards simultaneously references the locales he has visited (Arthur’s Pass, Wanaka, Aoraki-Mt Cook) and presents universal themes about land and our place in it.