The Aroma of Black 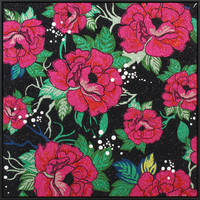 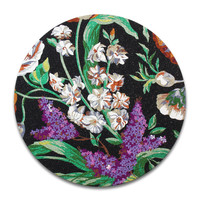 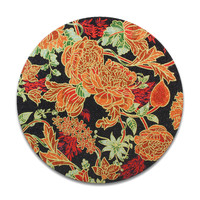 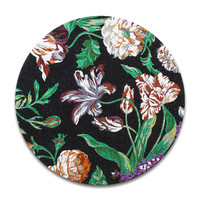 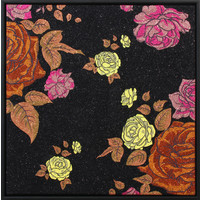 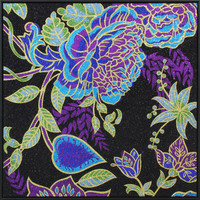 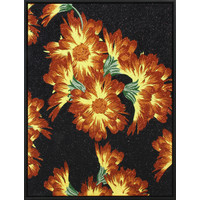 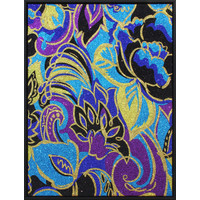 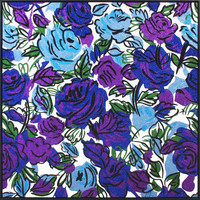 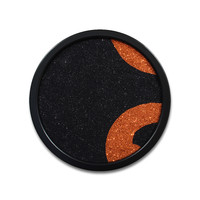 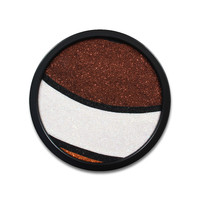 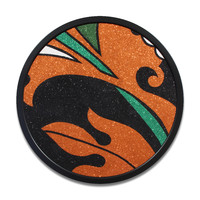 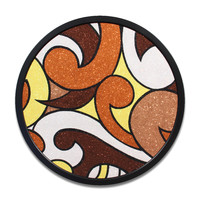 The paradoxes inherent in Reuben Paterson’s collection of new works are telegraphed by the title of his exhibition, The Aroma of Black. Rational thought tells us that a colour has no scent, but it is irrational reactions and experiences that Paterson wishes to evoke. He experiments with illusory space, the visual tensions between stasis and flux, and the role of memory in constructing meaning.

Paterson continues to draw visual inspiration from textile traditions and through these explores the mutability of images. The printed patterns of fabric are translated into carefully constructed glitter paintings whose textured surfaces retain a sense of materiality. The floral images themselves are sharp-edged and signal their shift from the soft fluidity of fabric to a fixed medium. Petals, stems and leaves are assembled from clearly defined blocks of colour and the obvious artificiality of the flowers deliberately recalls the multiple abstractions required to achieve the form depicted on the canvas. The process of transformation is highlighted as well as its final outcome.

Transformation not only occurs during the process of creation but during the contemplation of the work. As Paterson’s floral imagery becomes more and more complex, the layers of depth he draws from the picture plane grows. This is strongly evidenced in In Languages of Fragrance where individual petals in the red and pink poppies are outlined in black to emphasise fully the advancing properties of the colours. At times they seem barely contained by the picture plane and float above the soft green foliage. A subtle sweep of blue elements frame the central poppy, enhancing its dominance of the composition; smaller blooms fall back into the unmeasured depths of the rich black background. Groups of white spots complete the visual trickery as they hover over and above everything; to concentrate solely on them requires the eyes to physically re-focus and the rest of the work retreats into a blur.

The paradoxical illusion of a three-dimensional space existing on a two-dimensional surface is extended further once the effects of light come into play. The constantly changing play of light on glitter creates a permanent state of flux and reinforces the unpredictability of what the eye sees and what actually exists. None of Paterson’s artworks can ever be seen in exactly the same way twice and are, therefore, in a continual state of re-creation.

As a painting changes with each viewing, a story changes with each telling: one shaped by the vagaries of light, the other by vagaries of memory. The mutable aspect of his artworks dovetails into Paterson’s exploration of familial and societal histories. Each glitter painting contains a plethora of visual and symbolic possibilities and the evanescence of the medium mirrors the transitory nature of history. A temporal dimension underpins the artist’s works, reinforcing the idea of narratives extending backwards and forwards through time. Paterson has always used his practice to speak to his own family histories and his works open a space for the viewer to consider the stories that grow up and out of their own memories and experiences.