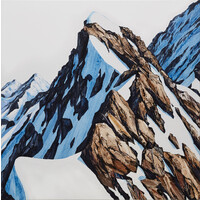 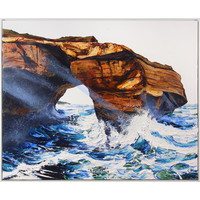 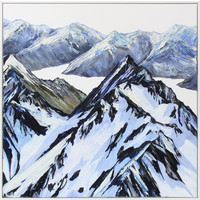 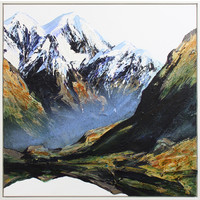 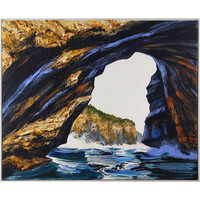 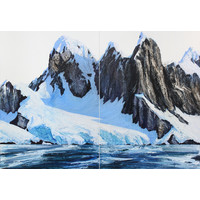 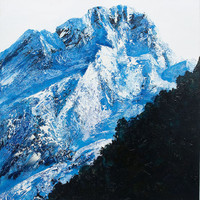 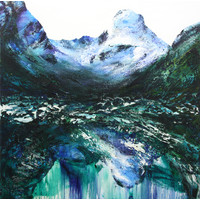 Neil Frazer’s landscapes depict a recognisable ‘reality’ while at the same time making the viewer intensely aware of the vivid painterliness of the works. Frazer uses a thick impasto technique and applies paint using ‘rags, brushes and his own hands’ with the end result that the gestures of the artist become one and the same as the rush of the water and the striations of the cliffs he depicts. (1) The effect is one of a world shaped by unfriendly forces of nature where even mutable reflections appear carved out of the water.

Juxtaposing flat voids and heavily textured painted areas on a single canvas, the tension Frazer captures between absence/presence underscores the powerful composition of the paintings. The tactile paint surfaces advance from the two-dimensional canvas, creating actual - not imagined - shadows that emphasise further the physicality of the subject matter. Frazer leaves it to the viewer to work out the lay of the land and it is not always clear where one element (mountain/sand/sky/water) stops and another begins. The feeling of being caught ‘between worlds’ evokes a sense of unease and disquiet.

Neil Frazer has been exhibiting for over three decades and his awards include the Frances Hodgkin’s Fellowship in 1992, and finalist placings in the Wynne Prize, one of Australia’s most prestigious and longest running art awards. In 2012 Frazer won the Member’s Choice Award, Tattersalls Art Prize, following this up in 2013 Frazer with the People’s Choice Award, Fleurieu Art Prize.

Few artists manage successful exhibiting careers on both sides of the Tasman, but regular sell-out shows bear witness to Frazer’s significant and ongoing achievements in both Australia and New Zealand.