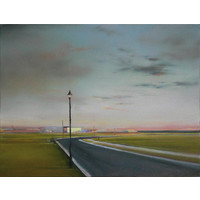 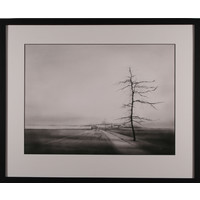 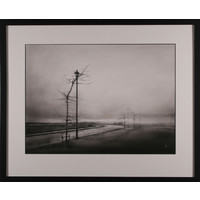 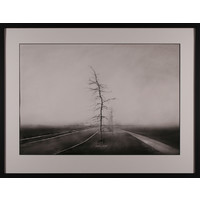 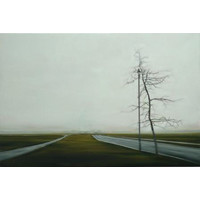 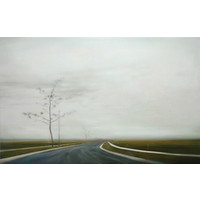 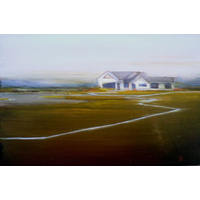 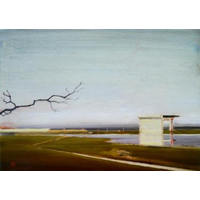 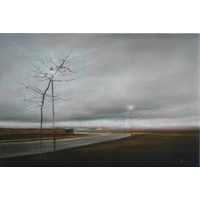 Eggleton identified that Edwards is producing a body of work “inflected with memories” and that the paintings “are less landscapes … than atmospheric and ethereal states of being. He is the painter as grail-quester, as metaphysical topographer, internalising the region that surrounds him and making it his own.” Equally, he observed “the key elements of his visual grammar” were implication and suggestion rather than statement; that Edwards was taking apart and rebuilding both the urban and rural landscape and he had “established a repertoire of motifs.” To this Eggleton added “Edwards draws the viewer’s eye out towards the distance as if towards great expectations … and, as your eye travels, so you become aware that travel is a theme: the expression of roads, and distances …” and also (insightfully) that “Edwards’ art is predicated on the notion of the slip or the slide: a shift in perception. His paintings both celebrate and destabilise what it is they depict.” He goes on to call this “a metaphysical state of suspension”, observing that Edwards’ work is “dissolving boundaries and fused pasturelands” with “the immanence of its sensory spaces expressed as landscape – and landscape itself as a form of inbetweenness …” while being “the domain of the everyday agricultural, but also a domain of yearning: the near and the far lifted into the transcendental.” Eggleton then asked, “How has he managed to achieve a lyricism at once so classic and poetic, and yet also so contemporary and so knowing about the pitfalls and clichés of his chosen genre?” (1)

Hanton wrote “Each work … was a piece of exceptional patience and ability … Aesthetes and allegorists would have … delighted at the combination of beauty and depth … We are part of the adventure … reminiscent of somewhere, a place walked but forgotten.” (2)

John Coley commented Edwards had captured and presented “a vast Canterbury space that was recognisable but never before painted in this way” and then completed his overview of Edward’s career by stating “Painters reveal to us things that we have failed to notice. It is a safe prediction that soon enough out and about on some sun-suffused vaporous morning someone will point and say to a companion – Look, there’s a Simon Edwards!” (3)

As Edward’s oeuvre has evolved, stylistic substance and narrative maturity has become evident. It is precisely this – Edward’s individuality of voice and ability to convince – which sees his works providing (as Mark Amery wrote) “a resonant psychological perspective on everyday experience … details become sketchy and dramatic in definition. Distance becomes difficult to judge … a detail begins to blur, you become aware that this is not just a representation of the eye travelling, but time and space sliding with” the artist’s “thoughts.” Amongst the many qualities of Simon Edwards work is his “play with the addition and removal of visual information” and in this respect he demonstrates “a masterly play between figurative and abstract elements” while also infusing his paintings “with the unease of the contemporary mind.” (4)

The paintings of Westpark have co-joined the infinite space of the rural landscape to the contrivance of a developer’s ‘invented’ suburb. Edwards uses the contradictions of architecture, roads leading to nowhere (yet), where scale is provided by the skeletal branches of deciduous trees and distance becomes blurs, atmospheres, possibilities, hope and denial.