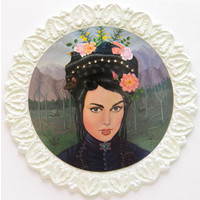 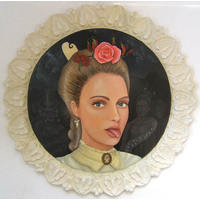 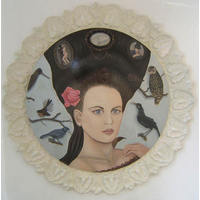 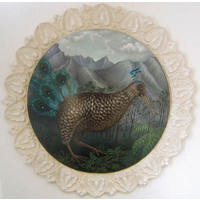 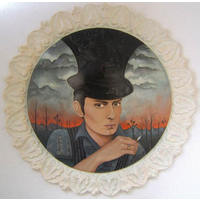 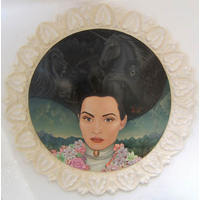 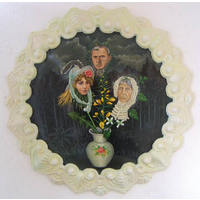 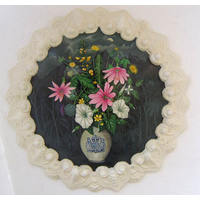 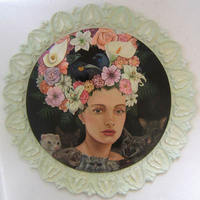 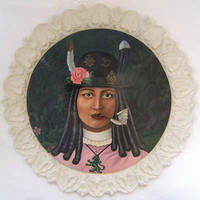 Rebecca Harris brings to her remarkable works a skill set deeply informed by varied disciplines and practise – the details and marks of engraving, nineteenth century photography, the character insights and gaze of portraiture, the traditions of still-life, the accuracy and precision demanded by ornithology and botany, the hand-built quality and delivery of a ceramic convex form which is carved, moulded and then dexterously painted - whilst utilising the design language and period architecture of the ceiling rose as the fundamental motif.

Upon this extraordinary skill base come complex compositions with narratives drawn from colonial history, informed by contemporary perception and in which a vast repertoire of techniques such as humour, post-modern appropriation, allegory, symbolism and surrealism, myth-making, environmental, political and social dialogues and concerns and so on assert presence and purpose, and establish point of view. Explicit reference is made to event, people and literature with implication, resemblance and innuendo used as devices to contemporize and bring the viewer back to the relevance of now.

Equally evident – and already remarked on by various commentators – is that Rebecca Harris has a language “that is all her own.” (1) This uniqueness (it has been stated) posits her immediately alongside a group of artists – Pick, Straka, Maseyk, Cauchi, and Crook – who are at the forefront of a “delicate figurative surrealism” with humanist concern and a (persistent) gothic sensibility in New Zealand art. (2) Indeed, it is clearly apparent and readily arguable that with this exhibition A Cameo Appearance we must acknowledge the arrival of Rebecca Harris as a singular figure who is walking well beyond others and charting her own oblique way forward.

In doing so Rebecca Harris establishes the core narrative structure of her work by going back into colonial history to witness the romance and contradictions of hopes and dreams, of facts and circumstance. Hers is a vision of arcadia disrupted and paradox explored.