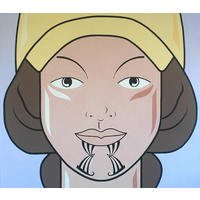 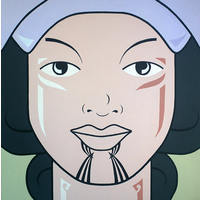 Pepeha For Lily (Study For Waitaki) 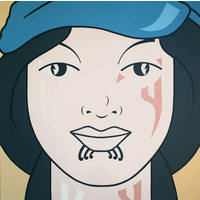 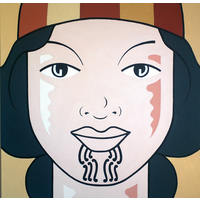 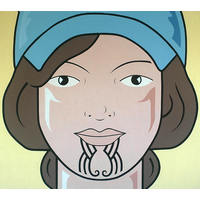 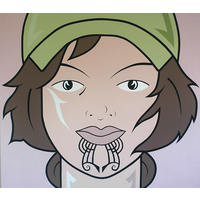 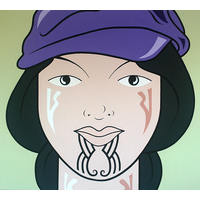 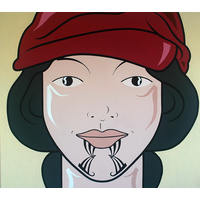 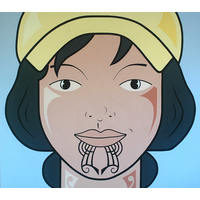 Jon Tootill explores the particularity of place and the ceaseless question of ‘who we are’ through a combination (part biography, part documentary) of internal debates that reference past, present and future circumstance, hope and dream. He avows the fundamental fact that art serves a social (and hence political) purpose and is of the place it is from. “Art has to show … that culture evolves.”(1)

His previous series of house paintings (2002-05) examined the notional suburban paradise of the ’50’s, ’60’s, ’70’s with issues of conformity, identity and lives hidden inside by attitude and perception, façade and glass. In this new body of work, Pepeha for Lily, these precepts remain but now he is introducing the specifically personal and the contemporary - using the moko to reach back into his past while also resolutely focused on modern urban reality and its homogenised logo culture.

In one sense this series of paintings had their beginnings over five years ago when Tootill’s daughter Lily started school and had a ‘costume’ day. In another sense it began earlier still with her birth and his finding a way back to the marae through this. “I became aware for Lily, and because of her.”(2) Tootill is of Kai Tahu, Irish and English descent and so Lily being Kai Tahu went to her costume day suitably attired. “The only thing I couldn’t source for Lily was a moko that was Kai Tahu. This started a search through galleries, museums and publications looking for moko attributed to Kai Tahu. Eventually I found one in ‘Ta Moko’ by D.R. Simmons and used it as the base for three moko designs titled ‘Ko Waitaki toku awa’ (Waitaki is my river), being the river she whakapapas back to in her pepeha (introduction).”(3) Underpinning these paintings then is the personal and (again) the particular of acknowledging where you are from and belong.

This is New Zealand and Maori culture, custom and protocol is unique to this country. It is now evident that pakeha ‘kiwi’s’ are becoming more Maori through the osmotic and conscious process of widespread movement of words, phrases, images, knowledge, concepts, customs and ritual out of the tangata whenua into the broader community, and by this a “new” hybrid culture is emerging.

So what is personal and particular is becoming a collective new identity. These paintings codify this through application of Tootill’s ‘invented’ moko (based on the braided structure and multiple flow channels of the Waitaki River) and the heavily stylised faces with highlight shadow markings. Tootill has used the “symmetry of carvings,”(4) colour simplicity and tonal balance to achieve realism whilst allowing subtleties such as cloth weave, structural abbreviation, repetition techniques, direct gaze, serenity of spirit and personality to emerge. Although these began as portraits (of Lily) they have become the “new face” of a people’s coming.