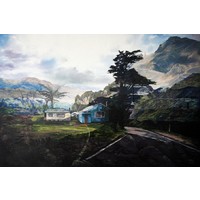 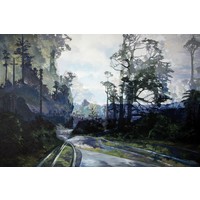 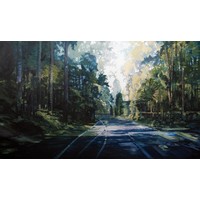 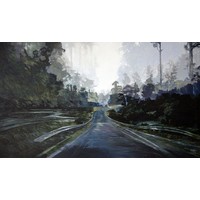 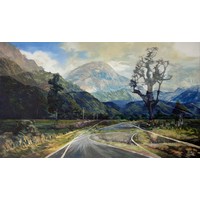 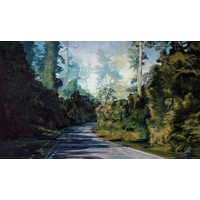 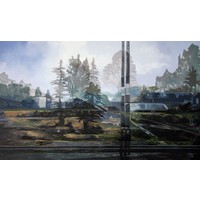 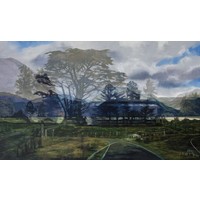 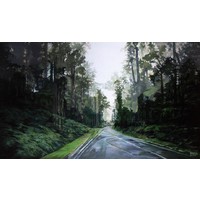 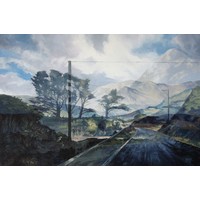 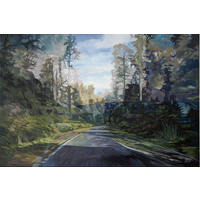 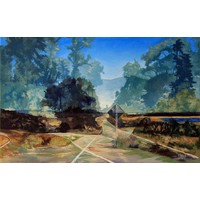 To describe Callum Arnold as a landscape painter is as true as it is misleading for in practically every work there are significant elements which collapse the past, present and future together. Simultaneously he allows the complicating intervention of weather, bush density, light cast, tone and phenomena of movement and distance to assert. These are no ordinary landscapes. Arnold is – as has been noted by prominent art writers - clearly reinvigorating and reinterpreting the experience of the NZ landscape.

Direction is a journey through the West Coast of the South Island. This journey is built from an amalgam of parts into which Arnold intervenes. He inserts the architecture (and memory) of buildings, fences, bridges, roads, signs, telegraph poles; he uses the dual linear patterns of road markings to move the viewer’s eyes in and around.

Arnold’s increasing assurance and confidence is revealed in a marked broadening of his palette. In key works, such as “West Coast Rain” (2008), “West Coast Pathways” (2008) and “West Coast Overcast” (2008) he establishes mosaics of overlays, patterns, modulating and variable light fall. He contrasts the real and unreal, native and exotic, atmospheres and location, farmed and abandoned.

In every painting there is a journey in progress and an expectation of change. “West Coast Corridor” (2008) is anthemic in character (as is “West Coast Shadow” (2008) and elements of other works) with the cathedral-like colonnade of tree trunks channelling expectation towards the light. In “West Coast Pathways” (2008) he mixes and opens ‘things’ up, introducing noticeable variances of tone and painterly textures. “West Coast Overcast” (2008) is everything but overcast; imminence is palpably established in Arnold building shadow into the middle distance whilst behind looms the sunlit dome of a mountain.