Major Paintings From The Survey Tour & Other Key Works 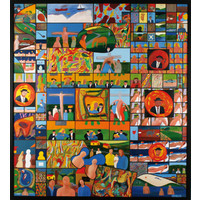 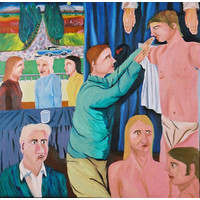 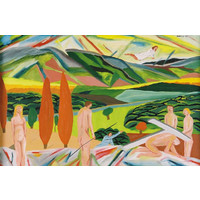 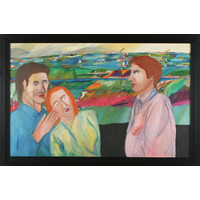 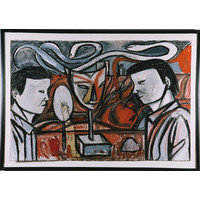 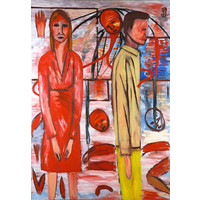 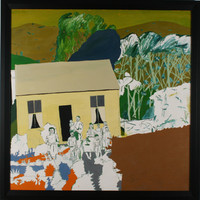 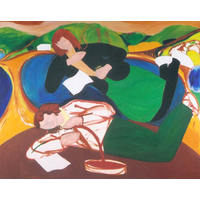 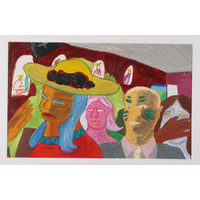 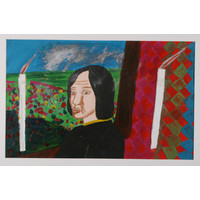 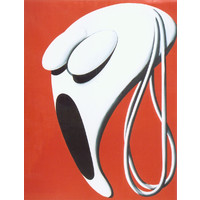 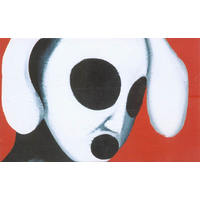 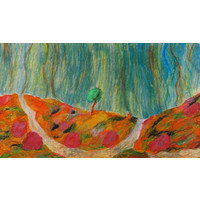 “A SUMMARY OF ACHIEVEMENT AND A DECLARATION OF PURPOSE” (1)

For more than three decades Jeffrey Harris has been acknowledged as one of New Zealand’s most important artists. The Survey exhibition curated by Justin Paton that toured to five public galleries and museums (2004-6) and accompanied by a superb catalogue publication conclusively established this.

In 1981 Jim Barr wrote that Harris “is a man of visions and insights” and that “it is left to artists like Jeffrey Harris to isolate the important visual and philosophical issues of our time and act as a catalyst to our suppressed emotions.” Barr also identified “at the core of Jeffrey Harris’s painting is the self-portrait … Like the artist they are complex, sometimes disquietingly emotional … in their way of expression.” (2)

In the 2005 Survey catalogue introduction Justin Paton asked “What is a painting?” then replied “Each work Harris makes is an answer ... And each answer breaks the question open again … the answers surge in. A painting is a ruin, a relic, an icon, a flashback. A condensation, a history, a timeframe, a mind-map. A sign of struggle, a state of conflict, a search that always courts failure. A screen, a wall, an act of concealment. Something strange, raw-nerved, extreme, turbulent.” Paton also added a statement which is at once specific and general: that a painting is “an act of retrospection and affirmation – a summary of achievement and a declaration of purpose.” And then “here is an artist who has insisted on his art’s right to be circular, obsessed ... whose new work … haunts and harasses his own past.” (3)

Harris has built up a complex iconography and he produces paintings which are literary in nature where the narrative can be didactic and autobiographical whilst also using allegory, myth, art historical sources, legend, literature, scavenged image and the interior landscape expansively. Equally clear is that he locates his work in the South Island landscape and uses this as a stylistic fundamental. He expects the viewer to talk back – emotionally and intellectually.

One of the most common criticisms of Harris’s work is equally one of its core foundations – that the emotional power of the work is so strong and exact as to be frightening. While it can never be said that great art is simple or easy, this mix of intensity and passion confronts the viewer and demands response, and for some this is simply ‘system overload’ – it is all too much, at first. However the corollary is that with Harris the rewards available are huge, and the effort is truly worth it. Others have questioned the breadth of his work but missed two salient points. With Harris his ‘range’ parallels the extent of his ‘reach’. Also as Paton identified Harris may work with diverse media and go on big journeys but these are undoubtedly circular in nature. Harris repeats, revisits, reinterprets, rearticulates, re-arranges and he keeps asking questions.

Ian Wedde (in Art NZ 114) remarked that “the audacity of the exhibition’s achievement is that it allows the work to step clear of its own … reputation, to survive its own … fame, to transcend … It allows us to look at the work with fresh surprise and refreshed pleasure. The exhibition does this by bringing into view the organisational, thoughtful, meditated qualities of the work…” (4)

Jeffrey Harris’s paintings tell incomplete stories – they read like poems, they feel like music. The mosaic tile-like structure of Day after Day (1974) is a series of vignettes of Christ being taken to the cross, crucified and taken down. This masterful work uses sequential narrative techniques whilst utilising still-life compositional devices, the rhythms of repetition, horizontal and vertical dialogues and patterning and so the irony is that one of the most complex works of NZ art appears engagingly simple and balanced. The Adoration of Christ (1972) likewise is an utterly remarkable work in which gesture is central to the dynamic of ‘reading’ it and how the viewer’s eye is carried from inside to outside, from the particularities of ‘home’ to the specifics of a farmed landscape.

Family in Front of House (1970) calls to mind the “images of new settlers” from nineteenth-century photography and around them a landscape is being built (by being ‘coloured in’). The famous Okains Bay paintings from 1975 onwards clearly owe much to this prescient, important, adventurous work.

The central humanistic impulse of Harris’s work is revealed in gesture and gaze. People look and point at each other, to the viewer and beyond. In Decorative Painting with 3 Figures (1971) Harris has placed the figures large in the foreground as a tableaux that brings to mind something of a Punch and Judy show and contrasts this (as a dissolve) with a literal, lyrical landscape. Two Figures with Mask and Mirror (1988) has much in common with Decorative Painting… but the artist is now using techniques of stage drama, symbolism, dream and metaphor to develop a pictorial narrative with the notable restraint of a reduced palette and utilisation of drawing disciplines.

White Painting (1988) was first shown in Melbourne at Deutscher Gertrude Street in 1989. Two over-sized figures stand apart in front of a segmented background in which limbs and spirit heads float. The male figure is revealed as dreaming or listening and ‘his’ spirit figure acts out the redemptive possibility of unity.

The spirit figures of course reach a full flowering in the From Dream series of which From Dream # 4889 is an astonishing example. This is painting at its visceral best. There is no comfort zone here. Harris has created biomorphic shapes which are human and animal, nightmare and dream, sometimes androgynous, sometimes explicitly male. There is a morphing of imminent event and fact, menace and tenderness and so on, to the extent that nothing is constant or as it first seems.

Untitled (Judith) No.7 (1978/79) is a compelling work from one of Harris’s best known series. It chronicles the end of an affair and places this explicitly in the locale of the Otago peninsula. The figures are suspended in one last embrace-less dance, a fountain of blood fills the interior of a dinghy. Yes there is anguish – this is a work about the death of a relationship – but witness the pictorial skills, observe the melodic role played by white, orange, the greens.

Jeffrey Harris has returned again and again through his career to the great story of Christ Carrying the Cross (1972). This painting can only be spoken of as a masterpiece and such is its resonance that the viewer can at first be forgiven for not noticing that Harris has brought the tale deep into the Otago landscape and openly acknowledges Rita Angus. Above this flies the angel Gabriel watching what had been foretold.

This exhibition of Major Paintings from the “Survey Tour” and other Key Works is both diverse and focused. One work leads to another, and then loops back again to start the process over.