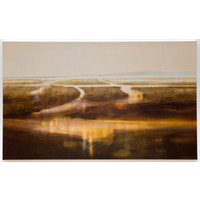 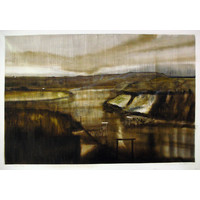 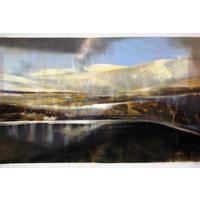 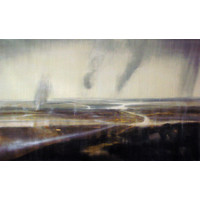 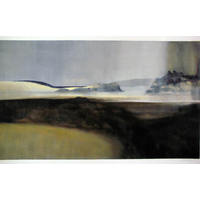 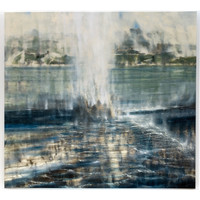 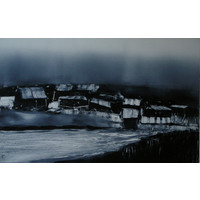 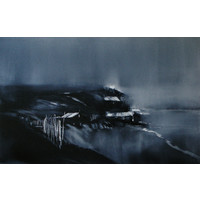 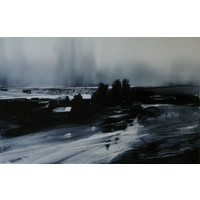 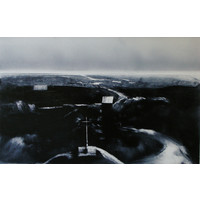 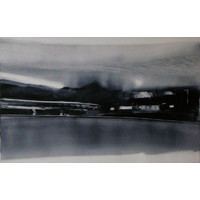 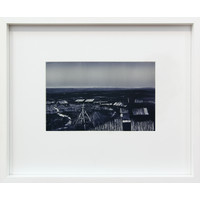 Garry Currin invents places containing the resonances of fact that are imbued with history and the imminence of event.

In this exhibition Occupied Territory Currin has turned his attention back to the land and “the forces of nature and the metaphysical balance of man’s place in the universe.” (1) He explores “the subtle though obvious presence of man, shifting the dynamic in his work to enhance its narrative possibilities.” (2)

This exhibition comprises two inter-related bodies of work: a group of smaller works on board and six large canvases.

The seven smaller works are remarkably delivered feats of painterly skill built entirely of white and Payne’s grey that establish a half-light of seeing. Photographic illusions abound. Feelings and effects accumulate. Habitations are shown to be transitory and fragile. Nothing is fixed or certain; there is softness, fade and unease. The presence and indices of man are revealed – buildings, fences, manufactured landscapes – and in this way Currin introduces political and sociological dialogues about how we live and what we value.

Currin’s mastery of large scale work has been identified and remarked on repeatedly by leading critics and commentators. In Lilburn’s Retreat he takes the viewer from the analogy of a theatre box vantage to Central Otago seeking why it was so important to NZ’s most renowned composer. The colour dynamics (highs and lows) construct numerous spaces that sit independently of each other whilst also coalescing to a larger ‘whole.’ The role played by the various horizontal and vertical elements accentuates these.

Currin has always been interested in releasing patterns (both dominant and contained) from a landscape and using the elemental structure of its forms and flows. In the remarkable inter-related suite Landscape with Fires I, II and III the view is across a tidal estuary that could be anywhere and just as readily be the Kaipara. Land emerges from mud as the water flows away. This marginalised, fragile landscape is revealed as threatened by the habits of use, fire and polluting smoke in the sky.

Meditation on Occupied Territory and Occupied Territory (Landscape with Fires) move the viewer in closer, before then going on differing journeys. Light seems to come and go even while being comprehended and Currin’s (deceptive, apparently restricted) use of colour grows more expressive and complex as layers are deduced and established.

While it has been understood for sometime that Currin is a major New Zealand artist with a narrative and style entirely his own, this exhibition categorically shows why art of importance can also be utterly exhilarating.